Conversing with Your Body

From Body Communication
Jump to navigationJump to search

Y’all should really do lunch.

Conversing with your body involves learning how to communicate with your body in a reliable manner, without interpreting vague signals or making assumptions. Reliable communication has two components: clear-cut action intentions that your body can understand, and clear-cut sensory responses that direct or discourage the clearly intended action. If you intend an action, your body will understand that action intention. If you pay careful attention to a single body part when you intend that action, your body can respond with behavior-directing sensations that encourage or discourage that intended action.

The following are lessons on how to get this communication working, and the associated difficulties and risks.

The Language Your Body Understands

Just like your body does not understand English, it also does not speak English. It cannot verbally tell you to go drink some water.

The body responds by either encouraging and directing an action, or by discouraging the action. This feels different in different body parts. In your hands, it can feel like a light tingly sensation that moves closer to or further away from performing the intended action. One moment it might be near your fingertips. The next moment it might have moved back to your wrist. The sensation moves to direct movement towards or away from performing an intended action.

Sensations like this can be triggered all over the body. An encouraging sensation in the feet can feel like they desperately need to move, while a discouraging sensation can feel like you are being grounded in place. Responses in the abdomen tend to take the form of noticeable muscle contractions. The positive abdominal response is a weak form of the encouraging downward pull of needing to scarf down food like crazy, while the negative abdominal response is a weak form of the discouraging upward pull of needing to vomit.

These sensations appear to be weak muscle contractions throughout the body, amplified by your attention. The abdominal response appears to be further amplified by also being a reflex. However, using the abdominal area is not ideal, as the discouraging response from the abdomen is a weak form of the vomit response. The body does not like triggering a weak form of the vomit response hundreds of times per day.

If you have trouble finding the sensations, no need to worry. That’s happened with about a quarter of the people that I’ve taught body communication to. It may take a little more time, but you can get it working. Your body may have found, at some point in your life, that these default responses were ineffective at getting you to take care of your body the way your body wanted you to. As a result, your body may have completely abandoned activating these behavior-directing sensations. In some cases, your body may have switched to providing alternative responses, such as aches or pains. In other cases, there is no noticeable, reliable alternative communication method being employed. Either way, it’s not hard to get it working again.

One of my friends had an issue like this when I taught them body communication. They tried to get their body to respond in their hand, like I usually taught people to start with. The sensation, however, wasn’t the normal, light tingly sensation. Instead, it was an ache. It wasn’t even in their hand. The sensation appeared in their arm. It was extremely unusual. They later tended to use their leg for these responses, as the sensations were easier to trigger and use in their leg, for some reason. It was a reliable way to query, but not ideal. A few years later, they did work on and quickly fix this issue, resulting in normal sensations working rather than having to rely on these pain sensations that their body had been using. Their body needed to run a rebuild to get it working.

The next lesson will teach you how to get information from your body. If you have trouble starting, continue to attempt to trigger and watch for the response sensations. However, only do so until you have triggered a rebuild. These are noticeable by a sudden need for reduced lighting, a reclining posture, often with elevated feet, and an aversion to particular behaviors, likely what you were doing at the time. Light sensitivity is usually the easiest to spot. It may feel like sensory overload, or it may just feel like you can’t think about this anymore. This rebuild state may last a few minutes to a few hours. If this rebuild is expected, it is often better to trigger it before going to sleep, as rebuilds are conducive to sleeping and sleep does not interrupt the rebuild process.

After the light sensitivity has passed, you may resume attempting to communicate with your body. If another rebuild is expected, it may be a good idea to wait until just before bedtime before you do that though, just in case it happens again.

Even after learning and getting used to these responses, a rebuild state may still be triggered at any time, as your body expands its ability to communicate with you through these sensations. This is perfectly normal. Rebuild states are common and not dangerous. However, not respecting rebuilds of the functionality of this new ability can cause aversions to using this ability. In extreme circumstances, ignoring a rebuild can temporarily mess up its functionality. Rebuilds are perfectly safe if you listen to them and avoid the behaviors that you are suddenly averse to. Decreasing lighting and putting your feet up during the process will also make you more comfortable and speed the rebuild process. For more information on rebuilds, see Rebuilds.

You will be warned throughout this website about respecting rebuild states. Please use the reminders as a chance to check yourself for any symptoms.

A Beginner's Guide to Hand Responses

Preparation: Go into a closed room without distractions or air currents. The sensation you are looking for can feel a bit like light wind, so it’s a good idea to minimize air current interference when you first start out. 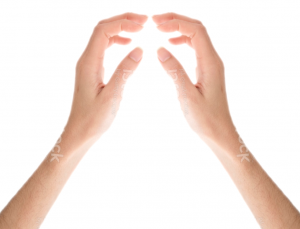 Move your hands close together.

These steps will help you discover the weak sensations in your hands that attempt to direct your hands.

These sensations that direct your hands are often mistaken for energy, also referred to as life force, ch’i, qi, or ki. It may feel like wind or like your hands are glowing or radiating. They aren’t. These sensations aren’t energy at all. These sensations are weak muscle contractions that attempt to direct your movements. They are not energy or life force or anything of the sort. Your action intentions and imagined actions provoke these weak responses in your muscles. The responses are your body’s attempt to either direct or discourage your intended or imagined actions. When you try to do something, your body either tries to show you how to do it or tries to stop you from doing it. This is the clearest and most reliable way for your body to communicate with you.

These steps will teach you how to use those sensations to ask your body a question, worded in the form of an action. 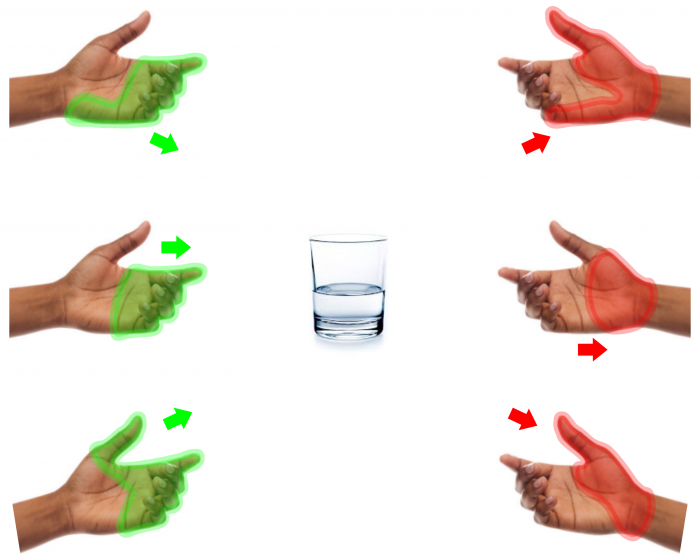 Positive (green, left) and negative (red, right) hand directing sensation locations, from different angles relative to a glass of water, when intending to pick up the glass of water, to drink it.

Repeat lesson 2 with different items until you are comfortable with it. You are looking to identify and get used to, in order of importance:

Your hands are not the only body parts that you can use to receive your body’s responses. You can learn to use any part of the body in a similar way. If you are having trouble finding the responses in your hands, you can try another body part. Any response to any question can be received in any body part.

Some areas are more convenient for certain types of questions. For me, feet are convenient for body positioning instructions and hands are natural for massage instructions. If both your hands and feet are busy, you can use your face to ask your body a question. Any body part can be used to query any question. It’s usually a good idea to avoid using your abdominal muscles, the first responses that were discovered, because their negative response is a weak form of the vomit reflex. However, it can still be used sparingly, if necessary.

If you are doubting the sensations you are receiving, check to see if it is getting difficult to focus on or trigger those sensations. This can be a symptom of a rebuild being triggered, causing an aversion to you triggering those responses. Once again, respect the rebuild and stop using these methods for a while. If you attempt to continue asking your body questions in this state, you are likely to create a longer-term aversion to asking your body questions. This should all feel easy. If it doesn’t, something is likely wrong that needs your attention. 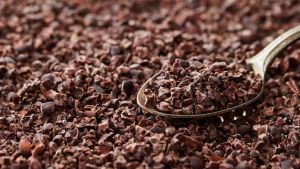 Most Americans like the taste of coffee and/or drink coffee regularly. It also has an addictive quality that tends to provoke cravings for coffee. For this reason, most Americans appear to expect drinking coffee to be encouraged by their body when learning this method. Everyone’s body that has been queried so far about coffee has produced a negative response to it. Not a single positive result yet. This makes coffee a useful option for determining if someone is querying their body or wrongly interpreting some other sensation.

Often, the individual’s description of the sensations that they are interpreting will also give away whether they’re working with the right sensations or not. If you ask about what a person is feeling when looking for these sensations and they describe sensations associated with physically performing the action, such as a warmth sensation from coffee, they are not yet aware of the correct sensations for facilitating communication with their body and should keep looking for the weak, movement-directing muscle contractions.

For clarification regarding coffee, caffeine itself is not completely discouraged. Several individuals, including me, do get requests for cacao nibs, an ingredient in chocolate that does have some caffeine. My body requests a small amount of cacao nibs per meal. Cacao nibs are tiny and are measured to contain 12mg of caffeine per tablespoon, or less than one milligram per milliliter. That adds up to less than a milligram of caffeine per meal. It is a small amount, but still, it is requested; not completely rejected.

There are few absolutes in the world. Communicating with the body is no exception. While an individual does not appear to be able to force a positive response from their body with their own preferences or positive beliefs about an action, individuals can force a negative response with their own fears or negative beliefs. If you believe water is contaminated, but you are thirsty, your body will discourage drinking the water, even if there is nothing wrong with it. This concept seems to apply to all needs that the body communicates. The block is on the source of the need fulfillment: the water, the person, the activity. The need itself will still be there, seeking a non-contaminated source of relief. Beliefs like this block certain sources of need fulfillment, but they do not usually block or change the needs themselves.

The Language Your Body Understands

A Beginner's Guide to Hand Responses